Creative performances took place in Glasgow and Edinburgh on Thursday 1 April 2021 involving activists playing dead bodies covered in oil and greedy Barclays bankers. These actions are part of a coordinated campaign of actions around the world organised by Extinction Rebellion. 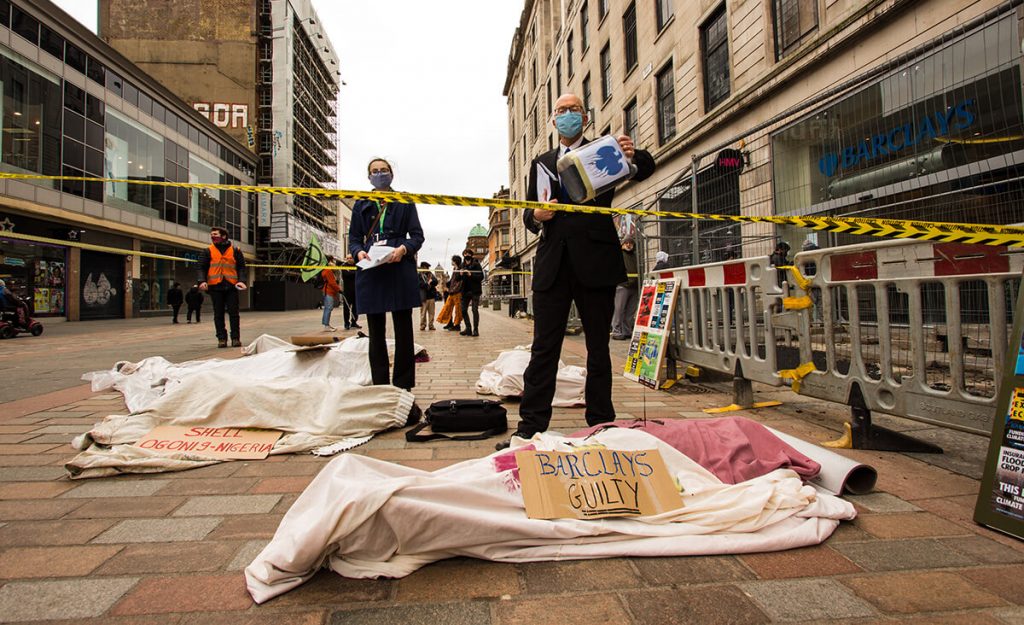 As part of the Global Money Rebellion Wave [1], these actions aim to draw attention to the deaths that have been caused by Barclays unethical investments in fossil fuels, and that we need an economic system that prioritises human welfare and flourishing, not infinite growth on a finite planet.

Extinction rebels will perform a ‘Climate Crime Scene’. Five activists will lie on the ground as dead bodies, representing those killed due to unethical investments Barclays has been involved in. One performer, dressed as a Barclays banker, will pour fake oil over five dead bodies, while another dressed as a detective will address the audience of pedestrians and bank customers. The five bodies represent:

Sarah Krischer, 28, archaeologist and XR Glasgow activist said “Barclays funding of fossil fuel projects directly contributes to death and destruction throughout the world. For all the claims they are transitioning to a green future, words mean nothing if they continue to fund projects that have a devastating impact on human lives, communities and the natural world.”

Michael, 59, management consultant and XR Glasgow activist said, “I’m here today because I need to be able to look my children in the eyes and say “I did what I could to raise awareness of Climate Change and hold those responsible, like Barclays, to account. We all need to speak up.” 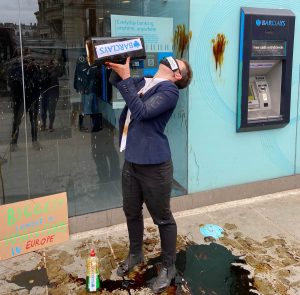 Performing to queueing bank customers and pedestrians, an activist dressed as a Barclays banker will pour “oil” and “greenwash” over another, holding a globe, representing Barclays part in causing the climate and ecological emergency, while claiming to be environmentally responsible. The activists may then leave oily handprints on the bank branch’s glass walls.

Eleanor Harris, 23, XR Edinburgh activist said “We have been allowing corporations like Barclays to profit from the exploitation of the planet and its people for far too long. Every day we allow this to continue results in further death and displacement. Our protest today will not itself stop climate breakdown, but it may strengthen the idea that this level of corruption and destruction is not a part of human nature.”

Barclays is the worst bank in Europe when it comes to investing in fossil fuels. [6] Barclays invested more into fossil fuels firms in 2020 than in 2019, despite pledging to be ‘net zero’ by 2050. [7]

To get involved with XR Scotland, visit: xrscotland.org

Extinction Rebellion Scotland is a non-violent direct-action movement formed to take urgent action in the face of climate emergency and ecological catastrophe, as part of the global justice movement.

Our demands, issued as a Declaration of Rebellion to the Scottish Parliament and Scottish Government on 24th November 2018, are as follows;